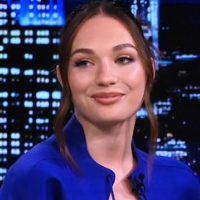 American actress and dancer Maddie Ziegler gained huge popularity after appearing in Lifetime’s reality show Dance Moms in 2011. She came to the fore in the presence of a music video by Australian singer Sia. Besides, she also gathered a massive fan following on social sites. Her Instagram account @maddieziegler has reached more than 13.8 million fans.

She began taking ballet lessons at the age of two and joined the Abby Lee Dance Company at age four, where she learned tap, ballet, lyrical, contemporary, acro, jazz, and aerial dance.

Maddie was featured as the “30 most influential teens” each year from 2015 to 2017 in Time magazine. She also appeared in some films including Camille Le Haut in the animated film Ballerina (2016), Christina Sickleman in The Book of Henry (2017), the title role in Music (2021), Mia in the high school drama The Fallout (2021) and Velma in Steven Spielberg’s 2021 West Side Story.

Maddie Ziegler was born on September 30, 2002, in Pittsburgh, Pennsylvania. She grew up with her parents Melissa Ziegler and Kurt Ziegler, who owned a mortgage company. Her younger sister Mackenzie Ziegler who is a singer and dancer appeared with her on Dance Moms. Maddie attended Sloan Elementary School in Murrysville, near Pittsburgh, Pennsylvania, until 2013. She has been dating singer-songwriter Eddie Benjamin since 2019.