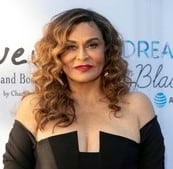 Beyoncé‘s mother Tina Knowles is an American businesswoman, fashion designer, and philanthropist by profession. She established a wear fashion brands House of Deréon.

As a successful fashion designer, Knowles has been featured in Vogue Magazine.

She began her career as a makeup artist at the age of 19. Later, Knowles worked as a dance choreographer for UAB in 1990. She rose her fame to come as a costume designer for Destiny’s Child. In 2002, she published a book, Destiny’s Style: Bootylicious Fashion, Beauty and Lifestyle Secrets From Destiny’s Child. Where she discussed how fashion influenced the group’s success.

Tina Knowles married the manager of Destiny’s Child Mathew in 1980. The American couple has two children Beyoncé and Solange. She got divorced from Mathew in November 2009.