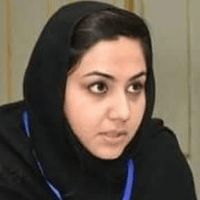 Pakistani politician Sumera Shams rose her fame after electing as a parliamentarian at the age of 26 for the Khyber Pakhtunkhwa province of Pakistan, representing the Tehreek-e-Insaf. After gaining the position, she was able to accumulate a massive fanbase profile on social media.

She was the first female member of the Public Accounts Committee, and served as the Chairperson of the Standing Committee on Health, leading elected parliamentarians and providing expertise in public health.

Sumera was elected as the member of the Khyber Pakhtunkhwa Assembly on a ticket of Pakistan Tehreek-e-Insaf from Lower Dir District in the provincial election held in July 2018. She is the youngest person to be elected as a Member of the Provincial Assembly. She was also one of the first women to cast a vote in Lower Dir. Before this, she served as a district councilor in Lower Dir in 2015. Sumera was named a 2022 Politician of the Year by One Young World, receiving her award in September 2022 alongside four other young politicians from around the world. She has collaborated with various national, Provincial, and international organizations to achieve social inclusion, gender equality, and sustainable development in Pakistan.

Sumera Shams was born on August 19, 1991, in Pakistan. She grew up with her parents and completed college, she enrolled in a medical college and graduated.