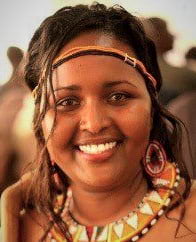 Kenyan politician and women’s rights activist Naisula Lesuuda is known as the Member of the Parliament of Kenya. She was the youngest member to serve in Kenya’s Senate at age 29 in 2013. With her indomitable work for the country, she gained huge fame, especially on social media.

She worked as a journalist at the Kenya Broadcasting Corporation, including hosting Good Morning Kenya.

In the 2017 election, Lesuuda was elected with 14,560 votes, defeating opposite incumbent Jonathan Lelelit who received 13,970 votes and became the first female member of parliament for the constituency. She announced her intention to apply for the position of Deputy Speaker but failed to submit her application before the vote when parliament sat in August 2017.

Naisula Lesuuda was born on April 30, 1984, in Samburu, Kenya, and grew up with her parents. She graduated from Daystar University with a Degree in Communications and Community Development.