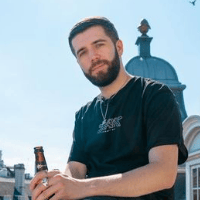 British YouTuber, streamer, and Internet personality Josh Zerker is popularly known for gaming content. He gained massive fame on social media platforms. More than 2.9 million fans follow him on Instagram @zerkaa. He is also active on other social networking sites including Twitter, YouTube, and TikTok with a huge fan following.

As a co-founder and member of the British YouTube group known as the Sidemen, in 2019, Zerker was listed as the ninth most influential online creator in the United Kingdom by The Sunday Times.

He began his YouTube channel in 2009 and got 4.64M subscribers. In his channel, most contents contain streaming videos. He first posted video game content of Call of Duty and FIFA.

Josh Zerker was born on September 4, 1992, in Bermondsey, London. After completing Bexley Grammar School, He later achieved an upper second honors degree in digital film production at Ravensbourne University. Since 2010, Josh has been in a relationship with Instagram star Freya Nightingale.