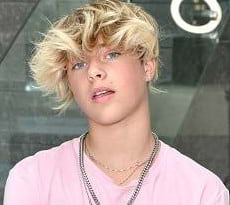 American Singer Gavin Magnus is a popular Instagram sensation & social media personality. His Instagram account gained more than 2.3 million followers until the end of 2021. He is active on TikTok with 2 million fans and 58.2 million likes. Gavin also has a verified Facebook page, where he reached 69K Followers.

As a solo singer, Gavin released two popular singles titled Hollaback and Crushin in 2019. These tracks hit on Youtube and earned millions of views. His cover of Beautiful People by Ed Sheeran got more than 12 million views. On July 24, 2021, Gavin’s Asking My EX-GIRLFRIEND Piper Rockelle To Be In The CRUSHIN’ REMIX Music Video! hit more than 1 million.

He collaborated cover of Señorita with Coco Quinn, whose he briefly dated from 2020 to 2021.