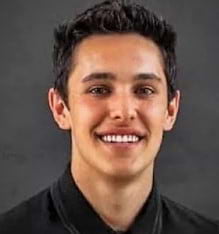 American real estate broker Dalton Gomez rose his fame as the husband of famous singer & actress Ariana Grande. He has gained huge popularity in the real estate business as well as social media platforms. More than 4K people follow him on his Instagram account. Dalton is also available including Facebook, Twitter & other social networking sites.

He mostly rose his fame after Grande confirmed their relationship with Dalton by the music video “Stuck with U,” which she collaborated with Justin Bieber.

He started working as a real estate person at the Luxury Real Estate Market and become the most popular real estate agent in the US.
As a professional real estate agent, He works at the Aaron Kirman Group and has sold multiple multi-million dollar homes by dealing with A-listed buyers.

In February 2020, Dalton and Ariana first publicly viral with a kissing scene at a bar in Northridge, Los Angeles. Later, they confirmed that they have been dating and finally got engaged on December 20, 2020. Ariana and Dalton married on May 15, 2021.