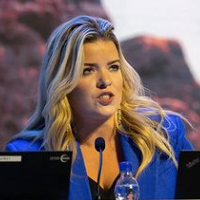 Icelandic politician Áslaug Arna Sigurbjörnsdóttir has been a member of Iceland’s parliament for the Reykjavík South constituency since 2016. She also served as the Secretary of the Independence Party from 2015 to 2019. Besides, Áslaug gained a huge fan following on social media, especially on her Instagram account @aslaugarna where more than 21K fans follow her.

Áslaug Arna Sigurbjörnsdóttir was born on November 30, 1990, in Reykjavík, Iceland, and raised here with her parents Kristín Steinarsdóttir and Sigurbjörn Magnússon along with 2 siblings. After finishing college, she graduated from the University of Iceland in 2015 with a bachelor’s degree in law. She received her M.L. in law from the same university in 2017 for a thesis on referendums and their legal impact on democratic governance.