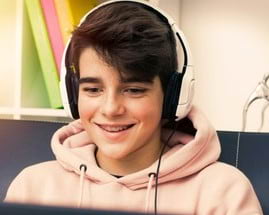 American popular vlogger Preston is known as PrestonPlayz. He rose his fame through gameplay videos on his youtube channels. Preston has a massive fan following on social media platforms. More than 1.6 million people follow him on Instagram. In his verified Twitter account, around 1.8 million follow his activity. Forbes ranked him as the sixth position at highest-earning YouTuber in 2019.

His early schooling was at the Local School in Texas, United States. From the very beginning of his childhood, Preston rise as a gamer.

In November of 2010, American YouTuber launched his youtube channel TBNRfrags. Following his previous success, he started another channel PrestonPlayz in July of 2012. Where he frequently uploads videos featuring the games Fortnite, Minecraft, and Among Us. He crossed 32 million YouTube subscribers along with four channels. His self-named youtube channel also has 18.5 million subscribers.

He made a reaction videos on Charli D’Amelio‘s tiktok in Auguest 28, 2021.