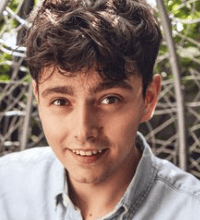 Polish YouTuber, radio, and television presenter Jan Dąbrowski gained massive fame after starting to upload computer graphics, games, and other stuff on social media as a blogger. His Instagram account @jdabrowsky was able to compile more than 2 million fans.

He has been publishing videos on the “JDabrowsky” channel since 2011 and currently, it has exceeded the barrier of 1.74M subscribers. As a gamer, he was used to streaming online games and often sgares them on his channel. One of the most viewed videos is titled ‘JAK SKUTECZNIE PODRYWAĆ? – GTA V Online #2’ got more than 5.6 million views on YouTube.

Jan has been the owner of the clothing brand JDabrowsky Wear since 2014. Besides it, he also sang some hit records including Donia ‘s song ‘Rzucam tuby’. In 2015-2016, he hosted a radio show on the radio “Czwórka” Terefere Radio. He became the ambassador of Terecamp youth camps in 2016.