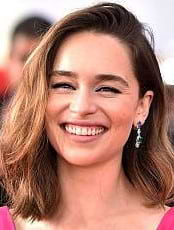 British Emilia Clarke actress, best known for her portrayal as Daenerys Targaryen in Game of Thrones. She was named one of the 100 most influential people in the world by Time magazine in 2019. Besides, Emilia has gained over 27 million fans on her Instagram account.

She stated in a 2018 interview that her maternal grandmother was the child of a secret affair between Clarke’s great-grandmother and a man from the Indian subcontinent.

She began he television debut as a guest appearance in the BBC One medical soap opera Doctors in 2009. After the year, Emilia was named one of the “UK Stars of Tomorrow” by Screen International magazine for her role in the TV film Triassic Attack (2010). She had her breakthrough role as Daenerys Targaryen in the HBO epic fantasy television series Game of Thrones (2011–2019).

Emilia Clarke was born in London, England on October 23, 1986. She grew up with her parents Peter Clarke, who was a theatre sound engineer, and her mother Jennifer who was a businesswoman. Emilia attended Rye St Antony School in Headington and St Edward’s School, in Oxford, which she left in 2005.