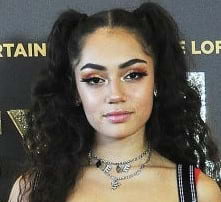 She started her social media journey at the age of 14. Her early work of various projects was able to catch up with the intention of her fans. As a child, Avani was a competitive gymnast before affected a stress fracture in her back.

In 2019, she went viral on TikTok for her transformation into a Harley Quinn-style clown led viewers to nickname her the “Clown Girl”. Avani played a character in an American web series Chicken Girls. Since November 2020, she has begun hosting a Facebook Watch talk show Here For It.

Avani Gregg was born on November 23, 2002, in Brownsburg, Indiana, United States. She grew up with her Indian Gujarati descent mother and African-American and Mongolian father. Avani has two sisters, Shanti Gregg and Priya Gregg.

She joined the LA-based collective The Hype House alongside TikTok star Charli D’Amelio in December 2019.