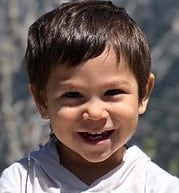 Ranger Ortiz is the youngest child of the Familia Diamond family. He gained a massive amount of fan following at an early age on social media platforms. More than 319k people follow him on Instagram @rangerortiz which is run by his mother.

Ranger has a self-titled YouTube channel that began in September 2018. The channel got 110K subscribers with having no videos yet.

Ranger Ortiz was born on October 26, 2018, in California, United States of America. He grew up with his parents Esthalla Ortiz & Sdiezzel. They collaborate with a YouTube channel named ‘Familia Diamond’ with 7.94 million subscribers. Ranger has an older sister named Txunamy Ortiz who also has a fashion-based Instagram account. His other two siblings Diezel Ortiz & Solage Ortiz also popularly known as the family member of Familia Diamond.