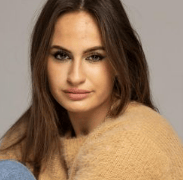 She started cheerleading at age six. After a year, she collaborated on her first videos with American rapper MattyB.

Her internet visibility has been rising since attending music videos such as My Oh My, Crush on You, and many more. Liv began her self-titled YouTube channel in 2017, where she makes challenges, pranks, reviews, make-up tutorials, and more.

Liv Shumbres was born on July 20, 2004, in Atlanta, Georgia, USA. She grew up with her parents. Liv has a brother Ari Shumbres.

She collaborated with lots of videos with American dancer Madison Haschak.