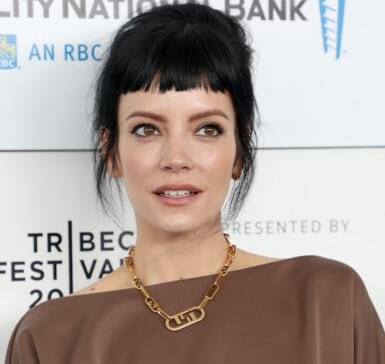 English singer Lily Allen is a songwriter, actress, and author by profession. She rose her fame vocal recordings on Myspace. The award-winning singer won 31 and got the nomination for 73 awards.

Allen played violin, guitar, and trumpet and was a member of a chamber choir at an early age. She also achieved grade 8 in singing during her school.

Lily Allen started her career with her first single, “Smile”, which reached number one on the UK Singles Chart in July 2006. English singer made her position with the debut record, Alright, Still. She got nominations at the Grammy Awards, the Brit Awards, and the MTV Video Music Awards for the record. In 2009, her second studio album—It’s Not Me, It’s You topped on the UK Albums Chart. The famous single of the album such as, “The Fear”, “Not Fair” and “Fuck You” helped her to receive the Brit Award for British Female Solo Artist in 2010.

Allen was born in Hammersmith, West London, to Keith Allen and Alison Owen. She has three siblings: an older sister Sarah, a younger brother Alfie, and a younger sister Rebecca. Before being married actor David Harbour in 2019, she had a relationship with Liam Gallagher.

She had tattoos similar include Lena Dunham, Rihanna & Lindsay Lohan.