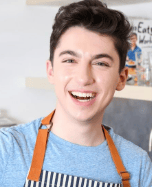 Besides gaining popularity on social media, he also massive fanbase profile on his TikTok account @eitan. Where Eitan made his recipe videos, showing various tips & tricks of food-making.

Eitan first appeared on television when he participated in Chopped at the age of 12. After gathering fans on social sites, he was signed to talent agency William Morris Endeavor in May 2020. Further, Eitan collaborated with several agencies, including food publishing magazines.

Eitan Bernath was born on April 25, 2002, in Teaneck, New Jersey, USA. He was raised with her parents Sabrina and Jason Bernath. His brother is named Yoni. Eitan enrolls at Columbia University in the fall of 2022.