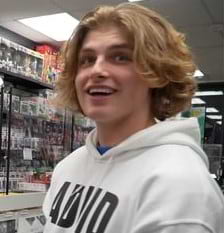 American Youtube Star Dizzy Dyl rose his popularity over social platforms by creating comedy content that gained a huge fan base profile, especially on Youtube’s self-named YouTube channel. After gaining immense fame, he started to sell his new styles of clothes including wristbands, tees, and hoodies on his dizzydyl.com website at affordable prices.

He joined the YouTube channel in May 2018 and was able to gather 427K subscribers. With the intention of spreading smiles through social media, Dizzy started uploading comedy content that got a huge response from his audiences. His ‘Hitting on Girls With Helium!’, a hilarious range, got more than 1.3 million views on his self-titled channel.

Dizzy Dyl was born in Indiana, USA, on October 26, 2002, and grew up with his parents. After completing high school, he enrolled in a private university and currently running his graduation.

He collaborates with fellow rapper Lil Peej with many contents who has also an immense fanbase profile on social media.