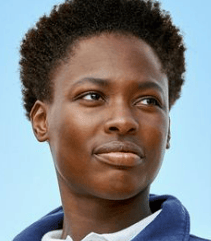 American Athlete Ashleigh Johnson rose her fame as a water polo player and consider the best goalkeeper in the world. She has gained a huge fanbase profile on social networking sites. Her Instagram @ashleighjohnson has been able to gather more than 25.5K followers. Ashleigh often shares her regular activities photos on her social sites.

She was a four-year letter winner and starter on her school’s team guiding them to three consecutive Florida State Championships. Ashleigh also earned All-Dade honors in her early career, while also obtaining all-county honors twice in swimming.

As a part of the American team, she won the gold medal at the 2015 World Aquatics Championships. In 2016, she became the first African-American woman to make the US Olympic team in water polo. Ashleigh winner of the gold medal in 2016 and 2020 U.S. women’s water polo Olympic teams.

Ashleigh Johnson was born on September 12, 1994, in Miami, Florida. She grew up with her mother Donna Johnson and four siblings Blake, Julius, William, and younger sister Chelsea. Ashleigh completed her school at Ransom Everglades School for high school.