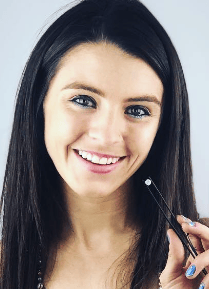 Adelle Archer rose her fame as the CEO & Co-Founder of Eterneva, an innovative company that honors the lives of remarkable people and pets by turning their cremated ashes into diamonds. She has been featured on Inc and Forbes’s coveted ’30 Under 30′ lists. Her social media also gained a huge fan following including her Instagram account @asellearcher.

When her business mentor, Tracey Kaufman died after a battle with pancreatic cancer, she wanted to honor her legacy and founding the company in 2017.

She was named Consumer Startup of the Year by the Stevie Awards and was featured on Shark Tank, receiving investment from Mark Cuban in 2019. Adelle received her MBA in Entrepreneurship at the Acton School of Business, considered the ‘navy seal’ programme for entrepreneurs. At only 23, she graduated valedictorian of her class. She spent four years as a Product Marketing leader in Tech, launching significant products to market with partners like Amazon, eBay, Square, Facebook, Pinterest, and Twitter.

Adelle Archer was born in the United States on May 12, 1997. She grew up with her parents and completed her early education in a local high school.